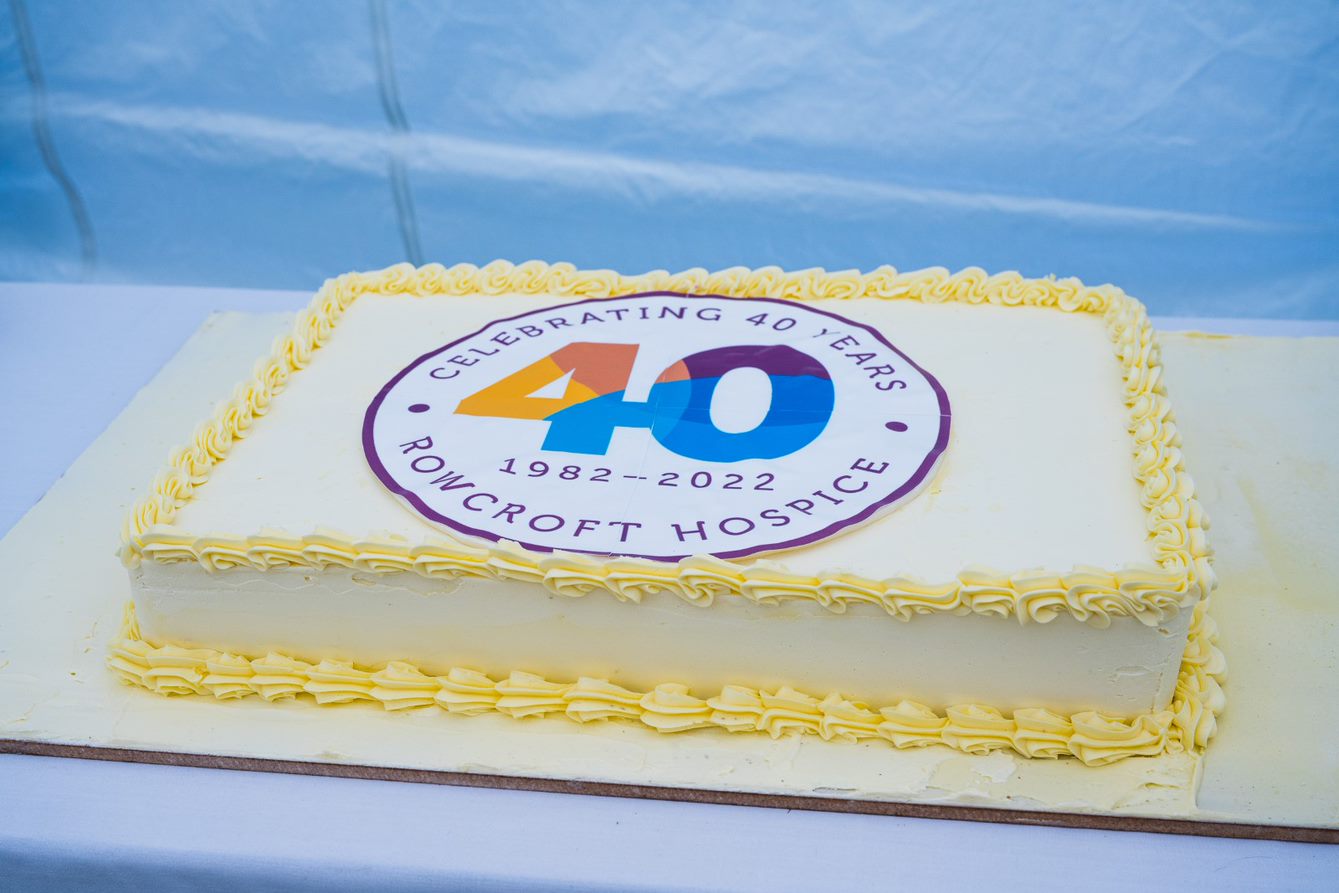 Rowcroft Hospice marked its 40th anniversary last Wednesday with a range of exciting events and the launch of a giant flag to celebrate the specialist care that we have provided to the communities of South Devon over four decades. Hundreds of people took part in the events to show their support, including representatives from local businesses, families who have received support from the hospice, volunteers and staff – past and present, members of the community and other supporters.

A special time to celebrate

“This is a time to celebrate 40 years of making every day the best day possible for our patients and their families living with life-limiting illness in South Devon,” said Rowcroft’s CEO Mark Hawkins. “A time to reflect on the extraordinary stories of care – exemplary care that is taking place each and every minute, night and day, 365 days a year, enabling patients to live and die with dignity and comfort, in their own homes or here in our Inpatient Unit. This is also a time to say thank you – thank you to our amazing community for supporting us through our 40-year journey, and thank you to our incredible teams for caring so compassionately for tens of thousands of people over four decades.”

Celebratory events at the hospice included: the unveiling of a plaque and the cutting of a cake to pay tribute to the late Richard Brinsley of the Torquay Lions Club and others who helped to set up the hospice in the early 1980s; the impressive 40 Years of Care photo exhibition that featured informative displays about Rowcroft’s history as well as hundreds of photographs sent in by families of loved ones who have been cared for by the hospice; Open Garden days that included guided tours of the hospice grounds; corporate networking events with local businesses; cocktails and opera on the terrace for patients in the Inpatient Unit; tea parties for volunteers and staff past and present; and performances by Rock Choir.

Celebrity Georgia Toffolo (best known for appearing in Made in Chelsea, and winning ‘I’m a celebrity get me out of here’ in 2017) added her voice to the many endearing messages of congratulation via a special video posted on Rowcroft’s social media channels. She said:

“I would like to wish Rowcroft Hospice a very big happy birthday for its 40th anniversary. As someone who grew up in Torquay, I know what a beautiful place South Devon is and what a wonderful community it has, so huge congratulations on such an important milestone and being a brilliant part of the community.”

A touching tribute to Doris

Kevin and Moira Dawe had travelled from County Londonderry in Northern Ireland to be part of the celebrations on Wednesday, by way of a special tribute to Kevin’s mum Doris who had been cared for by the hospice before she passed away in August 2020. Doris, who was born and bred in Torquay, shared her birthday – 4th May – with the hospice’s anniversary. It would have been Doris’ 90th birthday.  Daughter-in-law Moira said:

“We’re ever so indebted to the great work that was done by the Rowcroft Hospice at Home team to support my mum-in-law through her final journey and to support us as well. It was difficult because it was a time of the pandemic, and it was a time of deep stress and concern. The Rowcroft staff were able to come in and offer us the emotional support we needed as well as supporting Doris as the patient going through end-of-life care. We found them inspirational in their care of Doris.”

As part of the 40th anniversary celebrations, we also launched a giant anniversary flag that will be passed as a baton around the community and displayed at local businesses to thank everyone for supporting the hospice for 40 years.

“We’re looking for local businesses and venues to host our amazing flag,” said CEO Mark Hawkins. “For the rest of this year, the flag will be passed from venue to venue as a baton to celebrate Rowcroft’s 40 years of care for the people of South Devon. Please do get in touch if you or your business would like to host the flag as an inspirational gesture of solidarity with the hospice and our local community.”

Celebratory events in our shops and cafes

And festivities are continuing apace throughout the summer. Further Open Garden events are planned for the coming months with people across South Devon raising funds for the hospice by generously opening their own gardens for the public to explore and enjoy.

To find out more, please see our Open Gardens page. Or if your business is interested in hosting the hospice’s special anniversary flag, please contact Shala Weeks at: weekss@rowcrofthospice.org.uk