Home • Blog • The birth of the Friends of Rowcroft

The birth of the Friends of Rowcroft 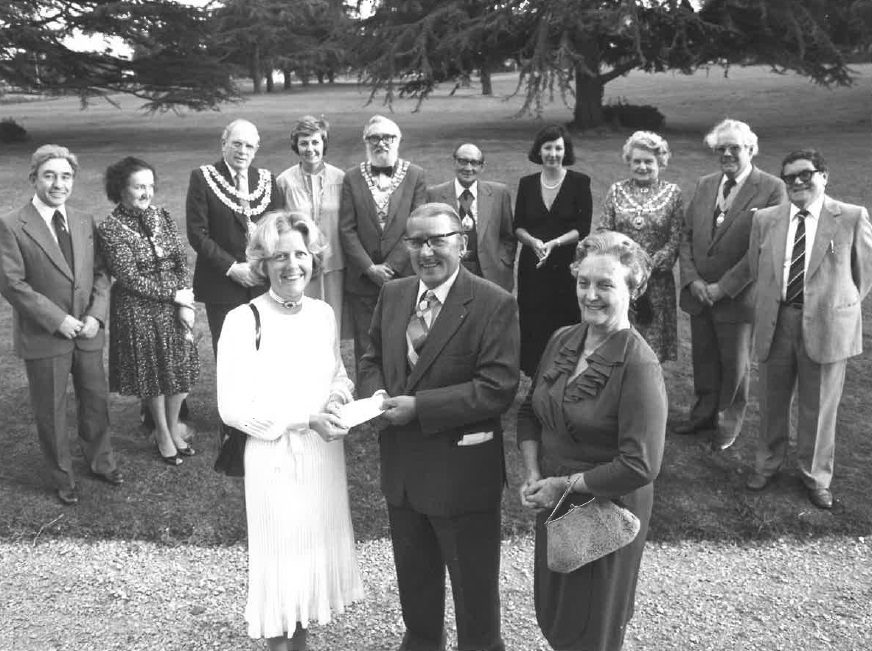 The early precarious years of the hospice

When the hospice first opened its doors back in 1982, there was only enough money in the pot for the hospice to stay open for three months. As we celebrate our 40th anniversary, we look back in awe and admiration at the sheer perseverance and determination of so many people whose remarkable fundraising work enabled the hospice to not only stay open but to develop the wonderful services that we are so proud of today. It was in no small way that the Friends of Rowcroft helped to achieve this. Bridget Tretheway (now Day), pictured above – front left – at the first cheque presentation in 1982, was the first Chair of the Friends of Rowcroft, and thanks to her phenomenal effort and steely determination in leading the group and raising funds, the hospice was able to keep going through those early precarious years. Here Bridget reflects on how the Friends of Rowcroft came about.

Reflections from Bridget Tretheway, the first Chair of the Friends of Rowcroft

“I became involved with Rowcroft Hospice in 1981 through Mike Mason, a founding member of Rowcroft [and a local GP and a member of the Torquay Lions Club]. Mike had gained the support of the mums at his surgery – mums whose babies he had delivered(!) – and he set up a fundraising group at Watcombe called ‘Mike’s Mums’.” 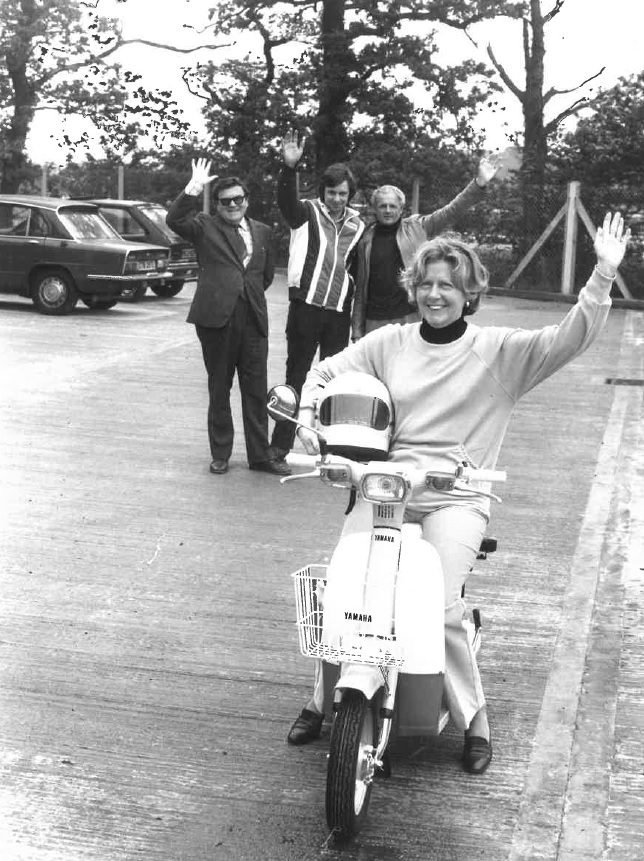 Bridget Tretheway on a scooter donated to Rowcroft

The Mike’s Mums group began raising much-needed funds for the hospice through events such as coffee mornings, jumble sales, knitting and crochet classes, dances and fashion shows. By 1982 they had grown so much and so successfully that a committee was formed, and the first branch of the ‘Friends of Rowcroft’ was born.

How Bridget became involved with Rowcroft

Bridget says: “I was passionate about the hospice, because my uncle who I was devoted to had endured a difficult end, as there wasn’t a hospice at the time. Mike knew this had upset me very much, and as they were looking for a Chairman to start the Friends of Rowcroft, they asked if I would take on the role. Mike realised that I had the knowledge to do the job; he knew that I had been heavily involved in politics with the local Liberal party – in 1974 I had fought Torbay for the Liberal Democrats winning nearly 21,000 votes! And so I agreed to become the Chairman of the Friends of Rowcroft. My family were very supportive – I couldn’t have done it without their support because it was a full-time voluntary position.”

Going from strength to strength

With Bridget at the helm as Chair, the group went from strength to strength. Soon two more branches opened in Torquay with people volunteering their time and energy to raise funds for the hospice. The first Rowcroft Hospice annual report shows that in 1982 the Friends of Rowcroft contributed a fantastic £52,000.

“When I came in, I straightaway decided to form the branches, like you do in a political party. I knew I also needed a secretary and a treasurer. We formed the branches by advertising in the local press and then having public meetings in different areas, such as Totnes and Newton Abbot. I had to be good at public speaking because I had to inspire people to take part. At that time there were some misconceptions about Rowcroft – that it was only for dying people – which of course it isn’t.

“The Friends of Rowcroft aimed to spread the word about the hospice, but also we needed to raise money as we needed funds so desperately to keep the hospice going.”

“I knew that we had to get out into the community to do our fundraising. It was about the people we knew, and of course because I had fought as a Liberal, I knew a lot of people in the area and that was vital. I was lucky that I had met Harry Edwards who had just become Mayor of Torbay, and I persuaded him to make us his charity of the year. This meant that all the fundraising money from his activities as Mayor came to the Friends of Rowcroft, for example, the proceeds from the Mayor’s Ball.”
Such was the success of the Friends of Rowcroft groups that before long groups were popping up all across South Devon. Bridget stayed at the helm of the Friends of Rowcroft for 20 years. 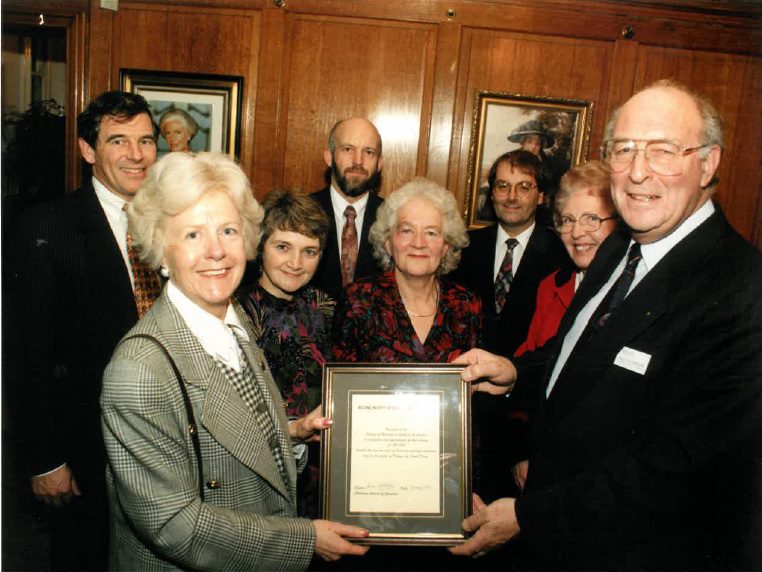 Bridget’s message of thanks to Jo Williams

“I’d like to pay tribute to one person in particular who was absolutely brilliant – the President of the League of Friends at Torbay Hospital, Jo Williams. She was very charismatic and we became close friends. She told me how she ran the League of Friends and she was always there to give me advice. Jo later became a governor of Rowcroft.”

Thanks to Bridget and the Friends of Rowcroft

Rowcroft would like to express our sincere thanks to Bridget for her inspiring dedication and achievement in leading the Friends of Rowcroft. We’re also so very grateful to all the members of the Friends of Rowcroft who have generously given their time, hard work and support to the hospice over the years – this has enabled Rowcroft to continue caring for our patients and families across South Devon for four decades.

The Friends of Rowcroft today

Since 1982, the Friends of Rowcroft have raised over £3million, helping us to provide specialist care to many thousands of local people living with a life-limiting illness. Every year the Friends organise a variety of fundraising events, from coffee mornings to concerts, raffles to fetes, and they sell Christmas cards and merchandise in communities across South Devon. Pat Goss, current Friends of Rowcroft Chair said:

“Today there are around 200 members of the Friends of Rowcroft. I’ve been Chair of the Friends of Rowcroft for the past 14 years, and this has been a great honour. Our groups organise a whole variety of fundraising activities and events, and we’re so grateful to our community for supporting us as every penny of profit goes to care for Rowcroft’s patients and families across 300 square miles of South Devon.”

Further information on fundraising for Rowcroft

For more information about how you can get involved to raise funds for Rowcroft, please see our web pages on: