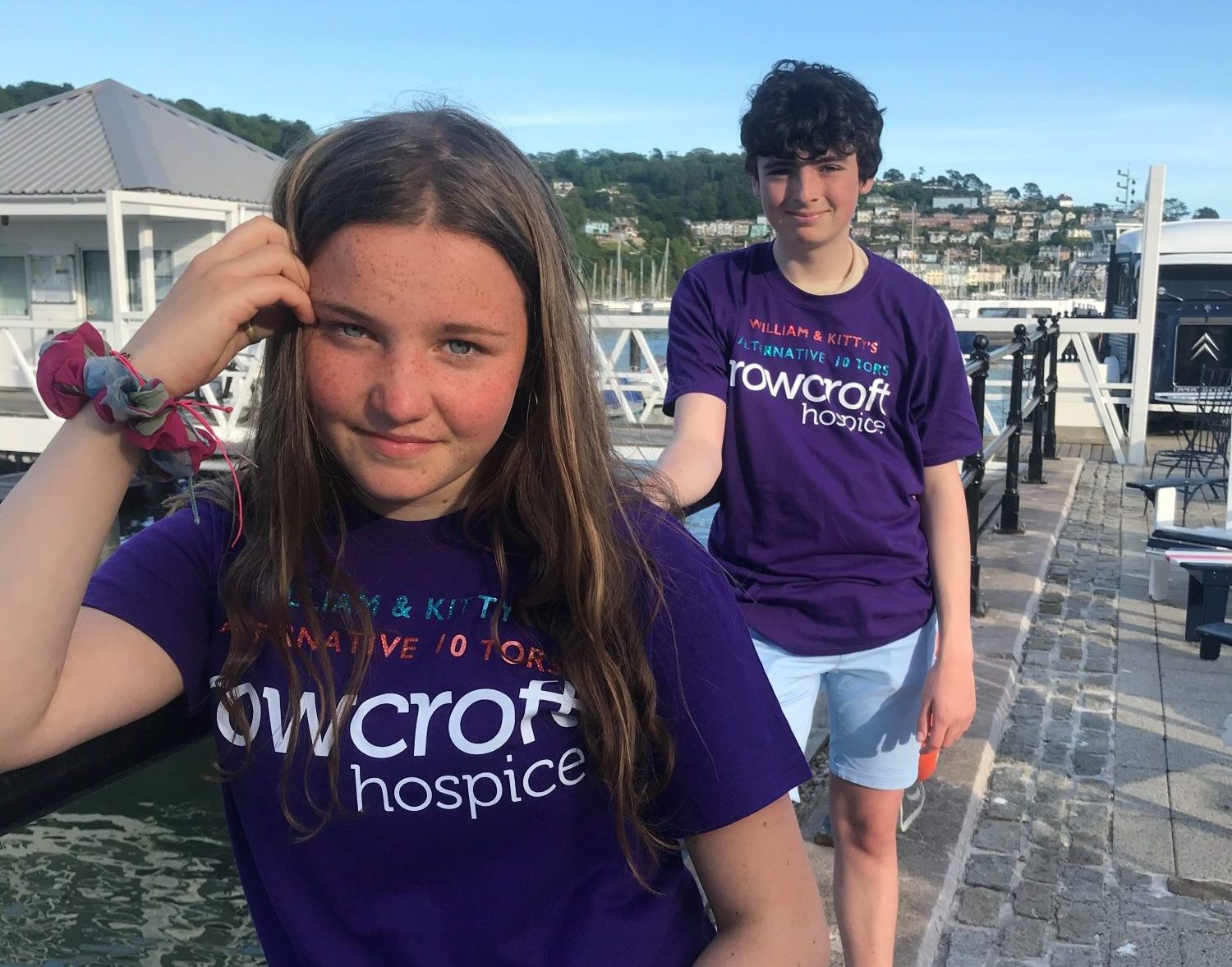 Rowcroft Hospice could not be prouder of two Dartmouth teenagers who have taken on their own version of the cancelled Ten Tors challenge, fundraising for their local hospice all the way.  On Friday 29th and Saturday 30th May, Kitty Hart age 14 and William Kilpatrick age 15, walked the 35 mile route from the Rowcroft Hospice gates in Torquay to Mill Bay; the equivalent distance of the Ten Tors challenge.

Their gruelling walk took them along the coastal path via Kingswear, Dartmouth, Torcross, Beesands, Start Point, East Prawle, Gara and finishing at Mill Bay. The fundraising duo stopped only to take in breaks in Dartmouth and Torcross.

For two years both Kitty and William trained together with local Dartmouth youth charity, Dart Trekkers for the Ten Tors challenge which was due to take place at the start of May. Sadly, like many other events, The Ten Tors challenge has been cancelled for the teams of hundreds of young people who take part.

“William and I have trained for two years for the Ten Tors and we were very disappointed when it was cancelled.” Kitty explains; “We have known each other our whole lives and we wanted to do something significant as an alternative to the Ten Tors walk and raise money for a special local charity, Rowcroft Hospice.”

“It is also something positive to mark not just this strange time while schools have been closed  but something to mark the fact we have been friends for so long before our lives take us in other directions.”

Rowcroft is a local charity close to Kitty’s heart, at the start of the year Kitty’s Grandfather, Colin Hart, spent 5 weeks at Rowcroft Hospice. Kitty’s mother Theresa Hart explains; “The time we spent at Rowcroft this year as a family has given us an even greater appreciation of the truly exceptional support and environment Rowcroft offers entire families at such difficult time.”

Kitty explains: “When my Grandad went to Rowcroft Hospice I was very nervous about visiting him there at first. I soon realised there was nothing to be worried about and what an amazing, friendly place it was which made the last month with my Grandad so much more special and  easier for our whole family and friends who visited.”

The money raised by the teenage fundraisers could not have come at a better time for the charity: Rowcroft’s income has been hit badly by the closure of its shops and he suspension of fundraising events, yet due to the COVID-19 pandemic, end-of-life care is more important than ever, especially in South Devon where the age of the local population is well above the national average. Rowcroft’s nurses, doctors and careworkers on the frontline are caring for vulnerable patients in their homes across Torbay and within Rowcroft’s Inpatient Unit in Torquay.

“It is through the darkest of times, that our community’s spirit shines the brightest,” says Alison Upton, Rowcroft’s Community Fundraising Manager. “I have been dazzled by all the messages of solidarity and support coming from all corners of South Devon. I have been so inspired and humbled by the creative and novel ways in which our community is supporting us. I would like to say a massive thank you to everyone who is helping us during these tough times.”

“If you would like to support us, in whatever way you can, please do get in contact as we would love to hear from you.”

For further information about how you can get involved in Rowcroft’s Fundraising, please see here or call Rowcroft Hospice’s Fundraising Team on 01803 210835.