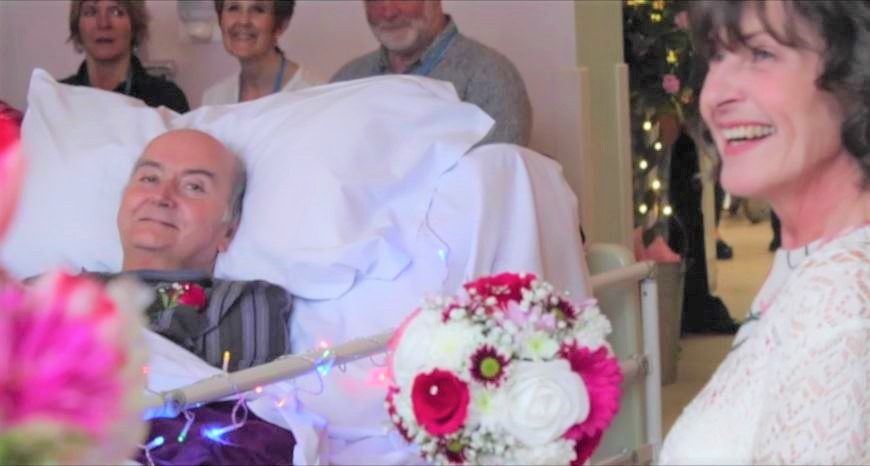 On 5 December 2018 a very special wedding took place for a Devon couple, whose wish to be married after 25 years together was granted – just a week before the groom’s final moments. It was a day they feared would never come following Paul’s terminal cancer diagnosis. Upon meeting the team at Rowcroft Hospice, Helen had explained that they had always wanted to get married but now thought it was too late.

Rowcroft’s Specialist Palliative Care Social Worker, Nicola Monks, worked closely with the couple and played an important role in the wedding day. She explains – “Whilst speaking to Helen about all the concerns and worries she was having at the time to try and support her, I asked her what is the biggest one? What is the main thing you would want from me at this point? And she said that she wanted to get married to Paul. They had been together for 25 years, he’d asked her over and over again and she’d always said no. She said to me ‘It would be a dream come true – but we’ve left it too late’.” In just a few hours Nicola had organised a registrar to marry the couple in a matter of days. Later that afternoon Helen proposed to a delighted Paul on Maple ward, at Rowcroft’s Inpatient Unit. With not much time to organise, the Rowcroft team rallied around to make their dream become a reality. Along with the overwhelming support of the local community, they arranged all of the essentials to make the day as special as possible, including a wedding cake, flowers, confetti balloons and photographer.

The wedding took place in a room at the hospice overlooking Rowcroft’s beautiful gardens and all the way down to the sea. Surrounded by friends, family and the hospice team, after over two decades together they became Mr and Mrs – “When I came to Rowcroft I became Paul’s wife, not just his carer.” The team went above and beyond to make the ceremony extra special, including some members of the team attending in their pyjamas. With Paul unable to get his suit or anything else on, they joined him to ensure he wouldn’t feel out of place being the only person in the room in his PJs.

Playing an integral part in their story was Ve rnon Davis, Palliative Care Nurse Specialist who works as part of Rowcroft’s Community Team. Providing care, advice and guidance to the couple as they transitioned between home to hospice, he had an incredible impact on them both. Helping with medication to improve Paul’s quality of life and supporting Helen throughout, Paul asked Vernon, who he heard was a member of a local choir, to sing at the wedding as a surprise for Helen.

With less than 24 hours’ notice, Vernon happily agreed and asked a few of his choir the night before the wedding during a practice break if anyone was available in the morning to sing. Following a morning rehearsal on the day, Vernon and four of his fellow choir members provided an uplifting arrangement of “This Love Will Carry Me” as Helen walked to meet her future husband. They also sang “Make you feel my love” as the couple signed the register and the gospel song “We’ve got all the love” at the end of the ceremony. Speaking shortly after the wedding ceremony took place, Nicola said – “When faced with a terminal diagnosis it is so easy to lose hope, but here at Rowcroft, we aim to bring light into the darkest of times. The day was a true celebration of the love that Helen and Paul shared and helping them to make such an important dream come true is something we feel incredibly lucky to have been part of. It’s just been so exciting to share their day with them, their excitement, their happiness and their joy. Today has been very magical, very special and very unique and the reason why I am here doing this job and why I work for Rowcroft.”

Having been able to share some of their most precious moments together as a couple, exactly one week after cutting their wedding cake – and with one single white balloon from the day left – Paul sadly passed away with Helen at his side. Determined to share their story of love and hope, Helen believes theirs is testament to the work of the Rowcroft Hospice team, enabling people to live life to its fullest, right up until they die. Paul’s Best Man, Rhys Barry-Owen said, “Rowcroft is an impressive building, but it is just a building. I think what makes it special is the staff here. From the moment I walked in I felt comfortable. Paul has repeatedly told me how comfortable he is here and that the staff can’t do enough. For those of you involved in the wedding, this is just incredible.”

Lara Tollast, Marketing and Communications Manager said, “I am so proud not only to work for Rowcroft but to live in a community that truly loves its hospice. Today has been a total celebration of unconditional love which is what Rowcroft is all about. This has been a magical wedding and a day I don’t think any of us will ever forget.”

A short film of the day capturing their love, devotion and precious moments together.

In loving memory of