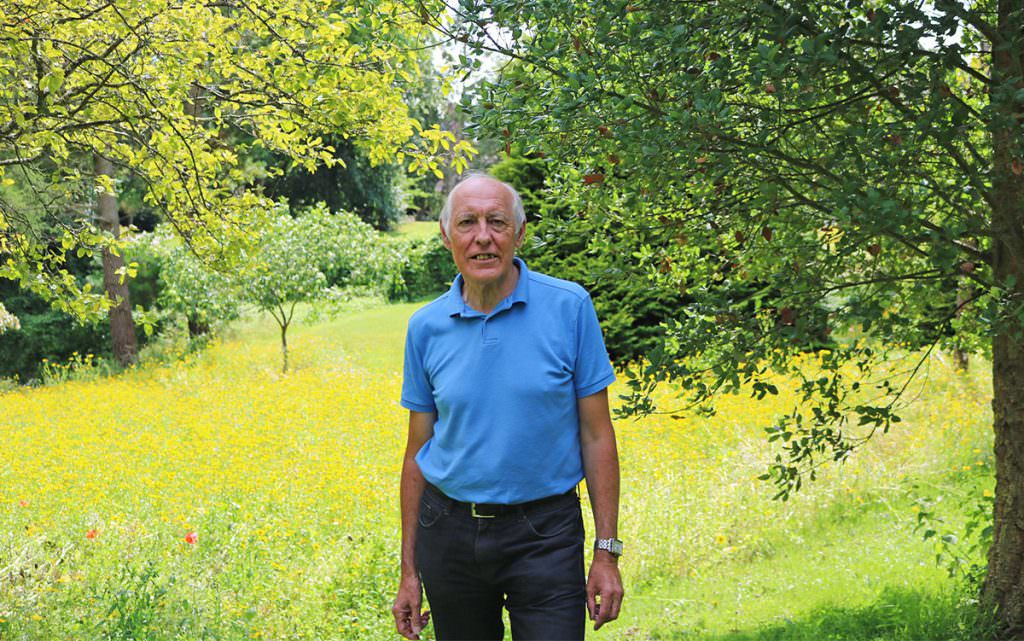 I owe so much to Rowcroft Hospice and its outpatient Bereavement Support Service, without whom and the help of an exceptional friend, whom I call my Guardian Angel, I do not know where I would be today. The care the hospice gave my wife, both in respite and during her final days was exceptional. Little did I know that two and a half years later I would suffer a reaction to losing my lovely wife which literally knocked me for six.

But with the untiring help of a Bereavement Counsellor at Rowcroft and my friend, I came through a very dark period escaping out of the tunnel and into the daylight.

A little more than two years after my lovely wife succumbed to cancer I found myself walking a tightrope balancing between reaching the other side or falling into an abyss of anxiety.

I wrongly assumed I was coping reasonably well until coming to a realisation that I was teetering on the brink of depression and a subconscious where those who find it impossible to turn a key to unlock the answer, find themselves in a long dark tunnel.

When she passed away in Rowcroft Hospice my emotions were very much bottled up, but wind the clock forward 26 months and they burst through the surface when I retired from work. It was a real jolt. While I was looking forward to calling it a day, I found I was missing my colleagues, and the daily office banter.

Our marriage had been a very happy 34 years and on my retirement we intended spending several weeks touring Britain, but cruelly fate intervened and it ended up as a shattered dream.

I was suddenly encapsulated into lonely surroundings carrying me beyond the parameters of a boundary I had never previously stepped across.

Now the bombshell dropped that my other half was no longer with me and I found myself spiralling into the depths of despair.

The anxiety was multiplying, eating was a struggle and within a few weeks an incredible one-and-a-half-stones had dropped off my weight.

Out of the blue, for the first time in my life, I was experiencing flashbacks, and they were so realistic I am convinced that people who have them believe they have seen a ghost.

One morning while getting dressed I looked across the bedroom and it had become the dance hall where I had met my gorgeous wife on New Year’s Eve and there we were kissing as midnight struck, but as if a page was turned and skipping the rest of our lives I was holding her hand and kissing her tenderly as she took her last breath in Rowcroft.

It was so vivid that tears were shed, and unashamedly tears ran down my cheeks after more flashbacks.

Everything was going through my mind including the cruellest blow of all when I sat with my wife listening to a specialist in Torbay Hospital tell her she had breast cancer and it was the second fiercest strain. When we arrived home we both cuddled each other and cried, because it was clear it was the beginning of the end, even though I found it hard to accept.

Months of chemotherapy took its toll and in the end she could not take any more and declined further treatment. She bravely faced head-on that she was dying and she had wonderful respite care in Rowcroft where the staff could not do enough for both patient and family.

It was a very dark period in my life. Family, friends and visiting nurses, whom I must thank, had been very supportive and in the last couple of months of her life she was in a special bed chair downstairs and I slept on the floor so that I could tend to her needs before going off to work.

There were also some horrific dreams. In one she was holding out her hands and I was desperately trying to reach her, but she was falling away, and eventually disappeared.

I find it very hard to cry at the best of times, though now I was bursting into tears when I took flowers to her grave.

Without doubt I would have cracked completely, had it not been for a close friend who became my guardian angel and despite being under pressure at work herself took the time to meet me regularly and talk me through some very rough times, and the superb voluntary counselling at the Outpatients Bereavement Support Service at Rowcroft.

The delayed mourning had resulted in severe shock and post-traumatic stress, and I owe my wonderful friend and the excellent counsellor at Rowcroft a deep debt of gratitude for putting me back on track and bringing me out of a tunnel of despair.

At times it felt as if I was all alone in the world and I asked my friend to meet and text me regularly just to give me some reassurance, and this she so kindly did.

Rowcroft looked after my wife so well and its bereavement counselling was invaluable in getting me back on track and it has helped countless people.

It is an amazing place and, like its bereavement support service, must never be allowed to fade away.

If you have been affected by any of the issues mentioned in John’s blog, please visit here to find out more about Rowcroft’s bereavement support services. Rowcroft also has a number of ways you can remember your loved ones and help to support other local people and families facing the hardest days imaginable.  Thank you for taking the time to read this blog and support Rowcroft Hospice.