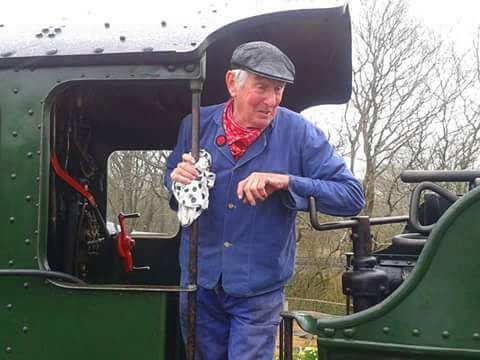 “Dad was diagnosed with cancer of the oesophagus in August last year. Daily radiotherapy and weekly chemo started in October, after Dad had been on his holiday and climbed 2000ft! He was an incredibly fit, 78 year old who still drove his beloved steam trains at the South Devon Railway, he was the longest serving steam train driver in the country.

He became critically ill on December 12th and by the 21st we were told that there was nothing else that could be done for him. After one more night in hospital on full oxygen, Dad decided he didn’t want to be on it to that extent and wanted to get home. On Friday morning, we asked the consultant if we could get him home. We were told as it was the Friday before Christmas it may not be possible but within an hour we had met a Rowcroft Hospice at Home nurse who proceeded to move heaven and earth to get Dad home. We all played our part so they could put things in place and by 8pm Dad was at home, in a hospital bed in his conservatory with an oxygen cylinder.

Dad could not wait to see the sunrise and their beloved garden and the Saturday morning was beautiful and sunny. Throughout the day Dad had a string of visitors, his lifelong friends came to say goodbye to him which was heart-breaking but he had a wonderful day, he even ate ice cream and drank coke! We knew by lunchtime thanks to the Rowcroft nurse that Dad had just hours left. We laughed, cried and put on a big spread, just like any of our normal family gatherings. Nothing was left unsaid and Dad told us not to be sad because we would be fine. Dad thought that he’d had Christmas and thanked us all for a lovely day.

We last heard Dad speak at 9:30pm, he thanked the nurses, told them he was fine and said I love you to mum. We all held him as he slipped away. Without Rowcroft we would never have had that experience, Dad loved coming home and we can never thank Rowcroft enough. Although devastated, we experienced something many don’t get the chance to. Without their support it would have been terrifying, but instead we were able to concentrate on being the family we always were for the last time”

“He loved a family Christmas and we all want others to have the experience we did at the end of their loved one’s life – Not everyone gets that chance.”